What do we mean by 'Arminianism'? 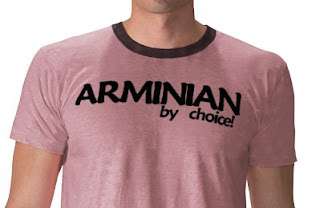 This is of interest to ecumenists because it is a theological approach tied up with Methodist identity.  It remains, for example, one of the theological issues still outstanding in the conversations about the Anglican Methodist Covenant.

Eunice's post lists the sessions at the Conference and I am planning a series of posts, which will summarise some of the material.  Martin Wellings presented the first session, entitled 'What do we mean by Arminianism?', where he defined the term and covered some of the history.   This is my gloss on what he said and any mistakes are mine.

Although Arminianism is understood to be tied into Methodist identity, there is concern it is being eroded, particularly as traditional hymnody falls into disuse.  However, the dialogue with reformed theology continues, although to day it much more friendly than it used to be!

Calvin during the sixteenth century made the predestination in Luther, Augustine and (arguably) Paul explicit, although it was his followers who made it into a theological system.  Arminius, a Dutch theologian during the late sixteenth century, and the Remonstrants argued, against high Calvinism, Jesus died for all and not just the elect.  By the 1590s, the Calvinist consensus in the Church of England was challenged by a fusion of anti-Calvinists, remonstrants and high church clergy.  These were lambasted as crypto-Catholics.

Wesley took up an 'Arminianism of the heart, arguing God foreknows but salvation is not foreordained'.  Calvinism, it was argued, destroys moral responsibility and leads to mechanical holiness.  Wesley recognised the role of depravity and grace and this led to his famous words: 'All may be saved'.  To other evangelicals this sounded like Pelagianism.

By 1937, to leap over a lot of history, it was claimed Methodism had made an end to Calvinism.  Since then there has been a reformed revival.