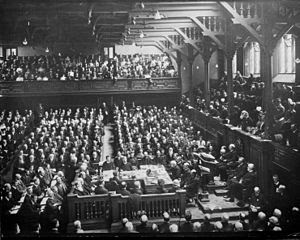 Image via Wikipedia
Today marks the start of a unique 5-way consultation of denominational ecumenical officers.  See the earlier post, Edinburgh 1910-2010: Towards Unity in Mission, for more detail. This consultation is a joint venture between Churches Together in England and the Ecumenical Officers of the Baptist Union, Church of England, Methodist Church, Roman Catholic Church and United Reformed Church. The first 24 hours (from lunch on Monday 11th to lunch on Tuesday 12th October) is the Open Conference, in which four speakers will explore the main conference theme together with 95 Denominational Ecumenical Officers of the five churches and a further 20 participants.

The second 24 hours (from after lunch on Tuesday 12th to lunch on Wednesday 13th October) is the Consultation for the Ecumenical Officers of the five churches, which will take up the theme of the conference and relate it to their work. This will be a time of reflecting together, sharing issues and looking for new ways of working together. This is the first time such a meeting of ecumenical officers has taken place, and this in itself is a significant development.

Here are some details of the contributions from the speakers for the first 24 hours:


The Revd Dr Jeremy Morris has recently taken up the position of Dean of King's College, . His academic interests include modern European church history, Anglican theology and ecclesiology, the ecumenical movement, and arguments about religion and secularization.
'Edinburgh 1910-2010: Mission and Unity in Context'
This opening address will explore the impact of the World Missionary Conference of 1910, taking into account both contemporaries’ views and those of subsequent generations. How is it that a conference constructed primarily as a celebration of mission, which took as its watchword ‘The evangelization of the world in this generation’, has come to be remembered primarily as a key step in the emergence of the ecumenical movement? And how is it that the ‘Faith and Order’ agenda, which has often been traced back to Edinburgh, became separated from the evolution of the institutional agencies of the missionary movement? Looking at the history of the interpretation of Edinburgh 1910 is a way into understanding the place and prospect of religion in the twentieth and early twenty-first century, with all the implications that follow for the relationship of unity and mission today, both in Britain, and in the wider world.

Dr Kirsteen Kim was Research Coordinator of the Edinburgh 2010 project from 2009-2010. She is Associate Principal Lecturer and Director of Programmes in Theology and Religious Studies at  serves as Vice-Moderator of the World Council of Churches’ Commission on World Mission and Evangelism, on which she represents CTBI.
'Edinburgh 1910-2010: The Development of the Discipline of Missiology'
Dr Kim’s address will look at the development of missiology by highlighting shifts in the mission theology of Edinburgh 2010 compared to Edinburgh 1910, with particular reference to global, cultural and regional factors. It will enquire what these shifts mean for unity in mission and also suggest local implications for mission in the British context for further discussion.

Father James Hanvey S.J. is currently the Director of the Heythrop Institute for Religion, Ethics and Public Life.  His address will focus on the interface between faith and culture.