Evangelical Congress takes Reconciliation as Key to its Mission 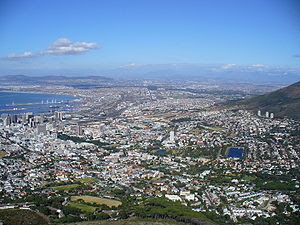 Image via Wikipedia
This month's CTE News carries the following report about the third Lausanne Congress:

The third Congress of the Lausanne Movement met in Cape Town, South Africa. Delegates from 200 countries discussed evangelism [the way the Christian message is announced] in diverse contexts, styles and cultures. The theme of the event was “God in Christ reconciling the world to himself” (2 Corinthians 5.19).

The Lausanne Movement seeks to be a global network of 'reflective practitioners' who share one vision for the work of world evangelisation. The movement began in 1974 when the Revd Dr Billy Graham and the Revd Dr John R.W. Stott convened the International Congress on World Evangelisation in Lausanne, Switzerland with the goal of framing “a biblical declaration on evangelism” and stating “what the relationship is between evangelism and social responsibility”. The Lausanne Covenant adopted by the first congress has been a rallying cry for many Christians, and for some it has come to define what is meant by “evangelical”. A delegation representing the World Council of Churches (WCC) and led by the WCC General Secretary, the Revd Dr Olav Fykse Tveit, has been present at the third congress, in Cape Town, an event the Lausanne movement leadership refers to as its "most diverse gathering ever". Over the decades, the WCC and leaders of the Lausanne movement have engaged in lively dialogue concerning the nature of Christian mission, evangelism and social action. Tveit is the first WCC General Secretary to be invited to address such a congress. In his greeting on behalf of the WCC, Tveit spoke of Christians’ “common vision of the holistic mission of God.” He added, “Let us keep the road open, and the dialogue going, so that we learn from one another how we can participate in God’s mission together with respect to others as one Body of Christ.”

A landmark in Christian history

The year 2010 was chosen for this third Lausanne congress because it marks the 100th anniversary of the 1910 World Missionary Conference, convened in Edinburgh, Scotland. It was a climactic event following 19th-century missionary expansion, and has been identified by historians of Christianity as the beginning of the modern ecumenical movement. Several 2010 events are being held throughout the world in honour of this centenary, including a June consultation in Edinburgh at which Tveit provided introductory remarks.

Tveit told the congress in Cape Town that reconciliation is what being Christian “is all about." He said" "We are called to be one, to be reconciled, so that the world may believe that God reconciles the world to himself in Christ." In the opening session of the congress, the Revd Dr S. Douglas Birdsall, executive chair of the Lausanne Movement, also emphasised the theme of reconciliation. Birdsall welcomed participants, saying that reconciliation is "our focus, our calling and our passion. It is this reconciling gospel that brings us together." He encouraged delegates to draw close to each other as they were drawing close to God. "This is a working congress with a specific task. Its outcomes, shaped by us all as we look to God, could help to chart the course of world evangelisation for the next decades," he said.

The diversity of the congress in Cape Town was echoed by the Bible study groups in which delegates meet each morning to reflect together on a text from Ephesians. Participants shared their own observations and applied what they read to their own context. Each group was like a microcosm of the global church, providing an opportunity to sit together, learn from one another, show concern for one another, stimulate and build partnerships and also to pray for one another.

Voices for justice and reconciliation

In an interview, the moderator of the WCC Commission of World Mission and Evangelism, Metropolitan Geevarghese Mor Coorilos, said that in a historical context that requires greater unity among Christians, the participation of the WCC in this congress of the Lausanne movement would go a long way toward bridging the gap between evangelicals and the ecumenical movement, "a distinction that we need to overcome". "It is particularly reassuring to listen to the voices for justice and reconciliation," Mor Coorilos said. He added that he prays that the spirit of unity in the congress, which was also demonstrated by a broad constituency and in a tangible manner at the centennial celebrations of the 1910 World Mission Conference earlier this year in Edinburgh, could be sustained for a long time.

Email ThisBlogThis!Share to TwitterShare to FacebookShare to Pinterest
Labels: Churches Together in England, Edinburgh 1910, Lausanne Congress, World Council of Churches